The South African government has plans to generate more electricity with natural gas. In June 2021, Mineral Resources Minister Gwede Mantashe proposed that the country extracts more of the fuel from its offshore fields. As a result, the government wants to invest in new gas infrastructure. The fuel is a “game changer”, according to Mantashe.

Let us look at what natural gas actually is and what people use it for. That will help us to understand whether it is a good idea to invest in this fuel.

Composition and properties of natural gas

Natural gas is made up of several different compounds, but primarily methane. It also contains smaller amounts of natural gas liquids. Namely, these are ethane, propane, butane and pentanes. Finally, water vapour is also a component. The gas has no smell or colour.

Natural gas is a fossil fuel. This means that it formed from the remains of plants and animals along with Earth materials. This process took place deep underground over millions of years. Therefore, miners look for natural gas deposits in underground rock formations. Then, they drill into this rock to extract the gas. Gas reserves may be located on land or offshore.

People use gas as fuel. They use it to generate electricity, create heat, cook and even power certain vehicles. Furthermore, manufacturers use natural gas as a chemical feedstock. This allows them to create plastics and other chemical products.

Gas use in South Africa

PetroSA is the main user of natural gas in South Africa. The public company converts it to gasoline or diesel fuel. It does this at the state-owned gas-to-liquids facility at Mossel Bay. However, the current South African government plans to use natural gas to generate electricity. This gas energy would help the country transition away from coal-fired electricity, it says. Therefore, the recent discovery of gas reserves off South Africa’s coast is important.

In 2018, more than three-quarters of South Africa’s gas supply came from Mozambique. Sasol transfers this gas with a pipeline to its chemical and fuel plants. South Africa still remains heavily reliant on these imports. However, since 2019, fossil fuel companies have found two natural gas reserves off the south coast of the country. These are known as Brulpadda and Luiperd, respectively. Therefore, South Africa is now looking to produce its own gas. In addition to these offshore reserves, the government also found shale gas reserves in the Karoo region.

South Africa currently lacks the required infrastructure to develop its gas industry. This includes port facilities and pipeline networks. This is a problem that the government is aware of. In June 2021, Mineral Resources Minister Mantashe advocated for the building of new pipelines. However, funding for such projects will likely be hard to come by. That is because international development finance institutions do not want to invest in natural gas. Instead, South Africa may have to look to private companies to develop new gas projects. Specifically, General Electric Co and ExxonMobil Corp have expressed interest. 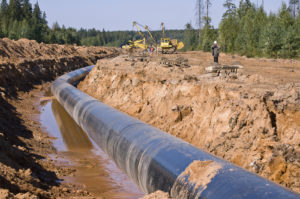 Construction of a gas pipeline

However, some energy market analysts see this as a risky investment. That includes Emma Champion, an analyst at BloombergNEF. “From an economics perspective, it doesn’t really make sense to build significantly more new coal or gas”, she says. That is because building new solar projects offers a better return on investment than these fossil fuels. This is particularly because the costs of big batteries to store renewable energy are coming down. But investing in gas projects instead means that South Africa will not be able to enjoy this cheap, renewable energy in the future.

Natural gas and the environment

Environmental groups stand against South Africa’s expansion of the natural gas industry. They point to the negative environmental effects of gas exploration, drilling and production. For instance, Greenpeace highlights the risks of French gas and oil company Total drilling for gas off South Africa’s south coast.

This deep-sea drilling would impact marine life, says the organisation. But at the same time, it would not create many jobs for South Africans. Furthermore, the government’s onshore shale gas plans for Karoo are also hazardous. That is because miners always require fracking to extract shale gas. This is a highly controversial and environmentally damaging practice. 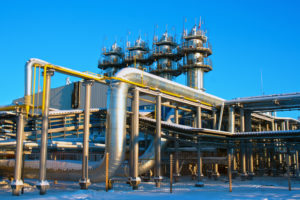 There is another large environmental concern related to natural gas: climate change. This is not lost on South Africa’s environmental advocates. That is why they are fighting Eskom’s new gas-to-power plant at Richards Bay. The state power utility believes that using gas will reduce its carbon footprint. However, environmental groups say that gas is no cleaner than coal. They point to evidence that “methane leaks during the full life cycle of gas production, transport, and consumption”. Unfortunately, methane is a much more potent greenhouse gas than carbon dioxide. In fact, it is responsible for about 30 per cent of global warming since pre-industrial times.

South Africa aims to cut emissions to net zero by 2050. Therefore, it has raised plans to construct several solar and wind electricity plants. However, the country’s own Presidential Economic Advisory Council (PEAC) has criticised the government’s energy policy. It noted in October 2020 that the policy favours gas projects over renewables. That is despite these projects being likely to produce “expensive power”, especially in comparison to “low-cost” technologies, like solar and wind. Not only would renewable energy be cheaper, but it could also meet South Africa’s energy needs without contributing to climate change.

In May 2021, Mantashe said that the government had “begun investing in clean technologies”. This would allow South Africa to “transition from a high-to low-carbon economy”, he continued. However, natural gas is not a clean technology. Therefore, it simply cannot be part of South Africa’s energy transition.

Climate changeEnvironmentFossil fuelsFrackingGreenhouse gasesGwede MantasheKarooNatural gasNet zeroPollution
We use cookies on our website to give you the most relevant experience by remembering your preferences and repeat visits. By clicking “Accept All”, you consent to the use of ALL the cookies. However, you may visit "Cookie Settings" to provide a controlled consent.
Cookie Settings Accept All
Manage consent