By Kate Griffin 28 October 2022
Soil erosion is a serious environmental problem in South Africa, affecting land and water resources. Watch this video to find out more.

Soil erosion is a serious environmental problem in South Africa, affecting land and water resources. Over 70 per cent of the country is experiencing some kind of soil erosion, although the severity of the problem varies.

Soil erosion happens because of two natural forces: wind and water. Different areas are vulnerable to different types of erosion. Exposed coastal areas with sandy soils tend to have more problems with wind erosion. Areas with heavy rainfall and sloping topography are more likely to be affected by water erosion. In many natural slopes, the connections between soil particles help the soil resist gravity – just. Heavy rainfall weakens these connections by pushing the soil particles apart, but plant roots provide important resistance. Low vegetation levels are a key contributing factor to water and wind erosion.

Gully erosion is the most conspicuous form of water erosion. It consists of channels, or gullies, worn into the ground by flowing surface water. Gully erosion happens when the land lacks vegetation to hold the soil together and help it absorb water. This leads to increased surface run-off, and the water starts to concentrate in drainage lines. Over time, this water carves out channels in the ground. Channels up to 0.3 m deep are known as rills. If they get any deeper than 0.3 m, geographers class this as gully erosion.

Sheet erosion is harder to see than gully erosion because it involves removing a thin layer of topsoil from a whole area. It happens when heavy rain washes away soil particles on the surface. This means losing layers of fertile topsoil, which seriously affects the productivity of the soil.

Topsoil is vitally important because the top few centimetres contain most of the nutrition and microbial diversity that the soil needs. Poorer quality soils are worse at supporting plants, animals and beneficial microbes. This reduces the diversity of wildlife and can even threaten whole ecosystems.

When water or wind erosion removes the richer layer of soil particles, it becomes much harder to grow crops or graze livestock on the land. Farmers may then try to boost the productivity of the soil through the increased use of fertilisers and pesticides.

When fertilisers make their way into rivers, the intense dose of nutrients stimulates the growth of microorganisms. These microorganisms use the water’s oxygen content as they grow and reproduce. Without enough dissolved oxygen to breathe, fish and other aquatic animals suffocate. Therefore, human attempts to compensate for soil erosion are damaging aquatic ecosystems. Even natural fertilisers, such as manure, can kill fish.

Pesticides also present a risk to water life. We do not yet know the full extent of their effect on water-dwelling flora and fauna. There is not yet enough research on the huge variety of chemicals that go into pesticide treatments. But, we know they are potentially toxic to animals, plants and microbes. They are also frequently harmful to human health. Depending on the pesticide, they can potentially affect the nervous system, irritate the skin and eyes, affect the endocrine system or cause cancer. 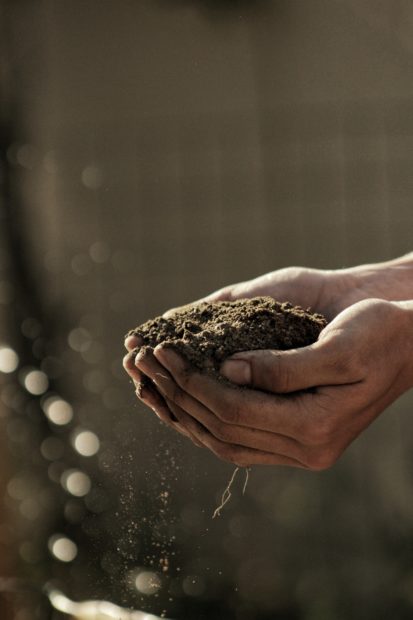 When soil particles are shifted off the ground, they often end up in water sources. Around 60 per cent of eroded soil ends up in rivers, streams and lakes. This is how chemicals from fertilisers and pesticides end up in the water. It also causes another problem. The soil particles form a sediment that can slow down water flow and silt up water sources.

When the Welbedacht Dam was completed in 1973, it had a storage capacity of 115 million cubic metres. But, after just five years, sedimentation had halved the dam’s capacity. This is why the Department of Water Affairs (now the Department of Water and Sanitation) built the Knellpoort Dam to supplement it. They made the right decision; after 20 years of silting, the capacity of the Welbedacht Dam was down to just 16 million cubic metres.

For water-scarce countries like South Africa, it is a serious issue when soil erosion pollutes waterways and reduces water storage capacity.

As soil erosion threatens people’s access to clean water, it is a health risk. When people do not have adequate clean drinking water or sanitation, this exposes them to diseases such as cholera and typhoid fever.

For farmers operating on thin margins, soil erosion risks their ability to put food on the table. Research from India suggests that soil erosion is a threat to the livelihoods of subsistence farmers. Declining yields push households into food insecurity and increase the number of malnourished children.

Around the world, it is a common pattern for people to abandon agricultural land once soil erosion has made it barren. They then move on to new land, often clearing forests to create farms. This pattern makes soil erosion a major cause of deforestation around the world. However, this becomes a less viable option as more land is used and abandoned and there is less spare land to go around. Soil erosion, therefore, contributes to the migration trend from rural areas towards cities as people search for work.

Land productivity modelling for the continent of Africa suggests that soil erosion will cause a decrease in food production of roughly 40 million tonnes in 2050. 27 million tonnes of this will be crops. Fruit and vegetable production will see the biggest decline in production. This is because it has such a large share of the land in the first place. But, the problem will affect the whole agricultural sector as well as food processing, thanks to a “negative cascade” effect. For example, meat production will decline because soil erosion makes it harder to grow feedstock for cattle. Africa will lose about 1.5 per cent of its farming output, at a time when its population is forecast to hit 2.5 billion. Erosion is a destabilising force, not just for the structure of the soil but for ecosystems, households, communities and whole economies. As outlined above, it harms ecosystems both on land and in water. For subsistence farmers, it threatens their livelihoods and prompts families to uproot themselves in search of other work. For the wider population, it threatens everything from our food security to our water supplies.

In South Africa, roughly 61 million hectares of land are classified as having a moderate to severe potential risk of soil erosion. That is about half of the country’s entire surface area. The areas with the highest erosion potential are the Eastern Cape, Limpopo and KwaZulu-Natal. The latter has been described in the past as the “food basket province” because of its successful vegetable and dairy production. Soil erosion and other factors, such as plant disease, threaten the area’s future farming output.

But, there are many ways to prevent – an, in some cases, reverse-  soil erosion. Restoring land helps to recover the economic value lost through erosion. A study by the United Nations Environment Programme found that restoring degraded land in KwaZulu-Natal would have economic benefits that outweigh the costs.

The story of soil conservation in Africa is complex and deeply political. While the government attempted to pass various soil conservation laws in the 1920s and 1930s, it was the 1950s that saw the growth of environmental groups trying to tackle the problem on a practical level. But, neither official policy nor environmental activism on this issue have paid enough attention to the land users themselves. One study states: “In South Africa the science and practice of soil conservation have been dominated by a technical approach which does not take into account the perceptions, knowledge and needs of people living in rural areas […] The research indicates that rural dwellers have valuable knowledge concerning soil conservation, but that the neglect of such communities by agricultural and conservation authorities has led to the unsustainable use of the land.”

This is backed up by another study, which suggests that South Africa has not successfully tackled soil erosion because of an exclusive focus on “the physical dimension of the problem”. It explained that we could not solve the issue while we ignore other dimensions of the problem. These include political priorities, misinformed perceptions and a lack of accountability.

Rather than imposing solutions on land-using communities, we should listen to them and treat their knowledge as a resource. In this way, we can develop new ways of using the land that balance the need for conservation with the needs and rights of the people who live off it. Food prices are affected by overall price inflation, but they are also an inflation driver in their own right.

CropsEconomyEcosystemsEnvironmentFarmingFood securityHealthSoilWater scarcityWildlife
We use cookies on our website to give you the most relevant experience by remembering your preferences and repeat visits. By clicking “Accept All”, you consent to the use of ALL the cookies. However, you may visit "Cookie Settings" to provide a controlled consent.
Cookie Settings Accept All
Manage consent