The link between coal, gas and water pollution

The link between coal mining and water pollution is clear. Discharge from mines causes the iron-rich water to turn orange. This visible evidence of water pollution from coal mining can remain long after the mining itself has stopped. For example, in some parts of Pennsylvania, USA, the streams and rivers are “the bright orange of a traffic cone“.

This is due to polluted water from mines that stopped working in the middle of the 20th century. The orange colour stains rocks and plants, and visitors can detect the rusty smell of iron oxide even before they get close enough to see it.

Oil spills are also highly visible. The effect of the polluted water on wildlife is hard to miss. For example, when the MV Treasure sank off the coast of Cape Town in 2000, the coverage focused on images of oil-coated penguins. More recently, the July 2019 oil spill in Algoa Bay produced a visible orange slick on the water’s surface. Tourists who visited the area were “greeted by the grim sight of rangers loading penguins covered with thick oil into small boats“.

But, the extraction and use of fossil fuels affect ecosystems in many less obvious ways. While oil spills are one-off accidents, much of the damage done to our watercourses is ongoing. Oil spills make the news because they represent something going severely wrong. But, the ongoing water pollution from coal extraction receives less attention because it is an acknowledged consequence of fossil fuel use.

“Virtually every stage of coal’s lifecycle – from mining to processing to burning – can impact local water supplies, sometimes with devastating effect”, stated the Union of Concerned Scientists in 2017.

Mining exposes sulphide minerals (found in coal seams) to the air. This reaction forms sulphate and soluble metal ions. When the mine is in use, the groundwater is continually pumped out. But when the mines close and the pumps are switched off, the groundwater seeps back in. The water then dissolves the metal ions and sulphates to form sulphuric acid. This acidic water will then dissolve any metals in the old mine.

The metallic content of the water depends on the mix of metals that were underground in the first place. But, it is likely to include high concentrations of metals, such as iron, zinc, copper, lead, cadmium, manganese and aluminium. The flow of acidic water from a mine is known as mine drainage.

When this polluted water reaches the surface, the toxic chemicals in it are not immediately obvious to the eye. As the water arrives at a river and aerates, the iron content will oxidise. This is what causes the giveaway red/orange colour. However, the other toxic chemicals potentially in the water remain invisible, in addition to the water’s acidity.

The human cost of polluted water 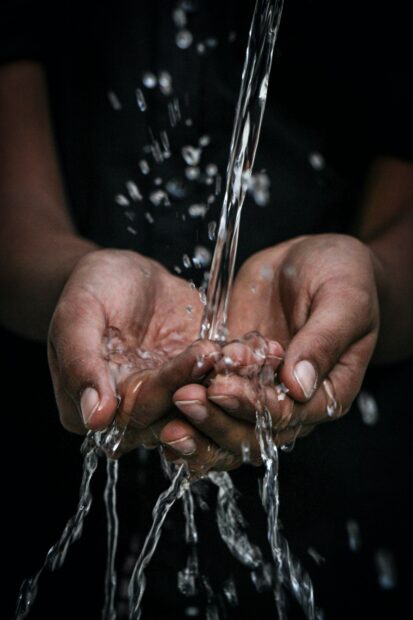 The town of Carolina in Mpumalanga has long suffered from water pollution caused by acid drainage. At one point, the water in the Boesmanspruit Dam, the town’s main water supply, had a pH of 3.7. To put this into context, pineapple juice and tomato paste, both considered acidic foodstuffs, have a pH of 3.5. Washing your face with water this acidic causes skin rashes and eye irritations.

The acidity of the water is pushing families into poverty because buying bottled water is so expensive. It is also affecting crops, and many farm animals have died from drinking contaminated water or grazing in contaminated fields.

The extraction of natural gas, or methane, also causes huge environmental damage. The creation of a gas drilling site can harm ecosystems on land as well as aquatic ecosystems. The construction process disturbs wildlife habitats and pushes toxic chemicals into nearby water sources. Once the drilling site is in place, there is the risk of leakage from wells that are not properly constructed.

In the case of hydraulic fracturing, or fracking, the gas industry uses a chemical mixture to stimulate extraction and fulfil other functions, such as preventing the well from corroding. The United States Environmental Protection Agency has identified nearly 700 different chemicals that can be used in hydraulic fracking fluids. The exact composition depends on the specifics of the drilling site. But, it often contains biocides, solvents and corrosion inhibitors.

Unfortunately, there are documented cases of this fracking fluid leaking into the groundwater near gas wells. Biocides are known for their harmful effect on aquatic ecosystems. The methane itself may leak out too. It dissolves in water, similar to the bubbles in a fizzy drink. There is no evidence that water with methane dissolved in it is poisonous. However, in high enough concentrations it can make water flammable. Fracking also uses a huge amount of water. A typical well could require five million gallons of water in its operational lifetime. Most of this water is not recoverable. This puts further strain on water systems.

South Africa is already one of the thirty driest countries in the world because of its low annual rainfall. Access to clean water is already an issue. Namely, over three million people still do not have access to a basic water supply service. Water stress hit the headlines in 2018 with the Day Zero crisis. The City of Cape Town warned residents that if water levels in the dams got too low, they would switch off the taps. This would mean lining up to collect water from designated collection points.

In a country already experiencing water stress, the extraction of fossil fuels is putting excessive strain on the system. Both coal mining and gas drilling reduce the quantity of water available for drinking and agriculture. We need a drastic reduction in fossil fuel extraction to conserve this precious resource for more important uses. Air pollutionCape TownCoalEcosystemsFarmingFrackingMpumalangaNatural gasWater scarcityWildlife
We use cookies on our website to give you the most relevant experience by remembering your preferences and repeat visits. By clicking “Accept All”, you consent to the use of ALL the cookies. However, you may visit "Cookie Settings" to provide a controlled consent.
Cookie Settings Accept All
Manage consent