The role of the Department of Energy in a green economy

The mission of the Department of Energy is to “regulate and transform the sector for the provision of secure, sustainable and affordable energy.” The strategic objective derives from the National Development Plan (NDP). It envisions that, by 2030, South Africa will have an energy sector that promotes economic growth and development, social equity and environmental sustainability.

The Department’s energy policy is based on the following key objectives:

The DMRE’s role in the green economy

South Africa is a signatory of the Paris Agreement – a global commitment to halve greenhouse gas (GHG) emissions by 2030 and reach net zero by 2050. This pathway sets out the transition to a green economy while limiting global warming to 1.5°C. South Africa is also committed to a “just transition” away from fossil fuels and towards renewable energy in a way that uplifts marginalised and underserved communities.

The DMRE has a leading role in facilitating the green economy. This is because South Africa’s coal-intensive energy sector currently accounts for 80 per cent of the country’s GHG emissions. Therefore, the DMRE’s policies are fundamental to South Africa meeting the Paris Agreement. Current policies include the Integrated Resource Plan 2019 (IRP 2019) and the draft post-2015 National Energy Efficiency Strategy.

A key success in the DMRE’s efforts on the renewable transition is the Renewable Energy Independent Power Producer Procurement Programme (REIPPPP). The programme invites independent power producers (IPPs) to bid for renewable projects that will contribute the majority of new renewable capacity between now and 2030. This includes 14,400 MW (megawatt) of wind, 6,000 MW of solar photovoltaics, 2,088 MW of battery storage and 2,500 MW of hydropower projects. 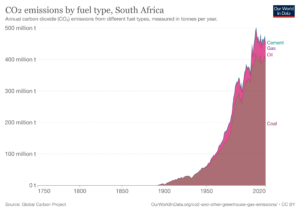 Despite the highly praised REIPPPP, South Africa’s plans to decarbonise its electricity sector remain “Insufficient” to meet the Paris Agreement, according to Climate Action Tracker (CAT). Their analysis finds high uncertainty on the successful implementation of the 2019 IRP, financial and operational difficulties of coal giant Eskom, and “mixed messages on the transition to zero carbon electricity system.”

Progress on climate is hindered as Minister Mantashe has stated he is pushing a “low carbon” rather than “zero carbon” energy strategy. Mantashe is a known advocate for the coal industry and is reluctant to accept international financial support to assist South Africa’s just transition away from coal. His department’s IRP includes new fossil fuel projects that are unaligned with the Paris 1.5°C pathway, and his Gas Master Plan further undermines decarbonisation efforts. This is despite evidence that new fossil fuel projects are more expensive and polluting than renewables.

This means the DMRE must adopt more climate-ambitious policies to reduce energy emissions in time to secure a climate-stable world. According to CAT, this includes more renewable capacity, stopping the planned new 1.5 GW of new coal capacity, fully phasing out coal power generation by 2040 and no investments in gas.

Opposition to the Department of Mineral Resources and Energy

The DMRE has a fundamental role in ensuring the success of South Africa in meeting the Paris Agreement via a just energy transition. This is in addition to delivering the Department’s mandate for “sustainable and affordable energy“. Considering South Africa’s heavy reliance on coal – as well as the country’s energy, unemployment, poverty and inequality crises – this is a monumental responsibility.

Saying goodbye to the DMRE and Mantashe

But, Mantashe is under fire over his continued support for fossil fuels that prioritise polluting corporations over citizens. A nationwide campaign, “Uproot the DMRE“, calls for the removal of Mantashe and the reform of the DMRE. “We are sick and tired of Minister Mantashe and the DMRE pushing forward corrupt, polluting and expensive energy and mining projects, like the powerships, fracking, and new coal power. It’s past time we unlocked a just transition to an affordable renewable energy future that works for the many, not just the corrupt few”, said Alex Lenferna from 350Africa.org.

Furthermore, in March, a people’s tribunal put the DMRE on trial “over corrupt and polluting policies and practices”. The tribunal featured testimonies from citizens “detailing how the DMRE harms their communities, the environment and the economy”.

To fulfil its departmental objectives, the DMRE must adopt a just energy transition strategy based on the Paris-aligned pathway. It must end financial support for fossil fuels and invest in its green economy powered by clean, affordable and accessible energy.

2019 IRPCyril RamaphosaDMREGas Master PlanGreen economyGreenhouse gasesGwede MantasheParis AgreementREIPPPPRenewable energy
We use cookies on our website to give you the most relevant experience by remembering your preferences and repeat visits. By clicking “Accept All”, you consent to the use of ALL the cookies. However, you may visit "Cookie Settings" to provide a controlled consent.
Cookie Settings Accept All
Manage consent