What is drought and why is it an increasing issue in South Africa?

A drought refers to a period of time when an area experiences lower-than-average precipitation. This can cause reduced moisture in soil or groundwater, damage crops and cause water and food shortages.

Today, water scarcity affects 40 per cent of the global population. By 2030, experts predict there will be 700 million people at risk of displacement as a consequence of drought.

A number of factors influence drought. These include climate change, the ocean’s temperature, changes in local landscapes and changes in the jet stream. There are different types of drought, which are generally categorised as follows.

These are the most common in nature and often precede the other categories of droughts. Meteorological droughts result from a prolonged period of low precipitation, which causes a region to suffer from dry weather patterns. The extent of rain shortfall, in addition to the duration, are factors that influence the severity of such droughts.

Agricultural droughts occur when water is too scarce to meet the needs of crops or livestock. They can stem from a meteorological drought — for example, when low rain levels cause crop failure. However, they can also result from deforestation or poor agricultural practices, which may cause soil degradation or erosion. Agricultural drought may also result from unseasonably early snowmelt when water runs onto fields before it is needed to hydrate crops. 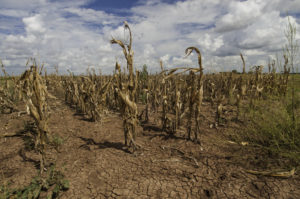 Drought is a natural part of the climate cycle. However, it has been proven beyond doubt that anthropological climate change is causing our planet to heat dramatically and throw our water cycle out of balance. Some regions are getting wetter and others much drier. This is causing droughts in some areas to become “more frequent, severe, and pervasive”, according to NASA, which uses satellites to monitor the increasing impacts of drought on Earth.

In South Africa, the mean annual temperature has been increasing to 1.5 times the global average. The country faces an increasing risk of drought, as well as extreme rainfall and flooding as a consequence of climate change and its influence on the water cycle.

Drought affects all areas of our environment and communities, and it can lead to a wide range of environmental, social and economic impacts. Below are just a few examples of how drought can have far-reaching consequences on people’s lives and livelihoods.

Drought can reduce both the availability and quality of water necessary for crop and livestock farming. It can also alter the natural nutrient, carbon and water cycles, which have consequences for important ecosystem services and agricultural production. Drought can also contribute to insect outbreaks. This means that drought can impact farmers’ incomes by risking crops and livestock. They may also face additional costs for irrigation systems, new wells or purchasing more water.

Drought can have significant consequences for human health. A decrease in water quality and quantity can affect access to clean and adequate drinking water. It can also result in higher food and water prices and food scarcity, which can lead to malnutrition and famine. Drought also risks a greater incidence of illness and disease, such as Valley Fever. It can also cause adverse mental health outcomes, for example, due to affecting livelihood security. Overall, drought is associated with an increase in mortality rates.

During a drought, decreased water levels and warmer temperatures can lead to algal growth. This lowers oxygen levels and poses health risks for both human and marine life. Furthermore, while rain and flowing water bodies carry pollutants away, drought can cause these pollutants to accumulate on land and in remaining surface water, therefore leading to soil and water contamination.

Drought can degrade the functions of healthy ecosystems. It can reduce plant growth and transform landscapes, for example, the loss of a forest to grassland or the drying up of wetland habitats. Since such habitats support a great variety of flora and fauna, droughts risk impacting populations or even leading to the extinction of some species.

Drought is a contributing factor to wildfire. This is because a hotter and drier environment – in combination with drier and more flammable vegetation – can increase the probability of large-scale wildfires.

Drought impacts port and waterway transportation, which hits supply chains. This results in disruptions and an increase in transport costs. The associated higher temperatures can also impact roads, runways and train lines. 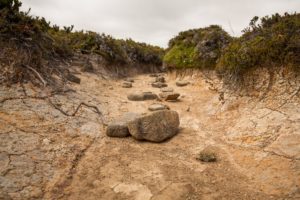 South Africa is a water-scarce country and the 30th driest in the world. The country’s average annual rainfall is 450 mm, much lower than the global average of 860 mm. This rainfall is also highly variable, leading to skewed water availability distribution between regions. All municipalities in South Africa have been affected by drought over the last 30 years.

The severe drought in 2007 resulted in crop failures, food price spikes and food insecurity. Scientists found that the severity of the drought was exacerbated by climate change. However, in 2015, South Africa suffered its driest year on record. The effects of the resulting water shortages still persist today. Delayed rainfall and decreasing dam level led to the worst drought in the country since 1982. As a result, the government declared the provinces of KwaZulu-Natal and Free State disaster areas. Other affected provinces include the Western Cape, where Cape Town’s taps ran dry in 2018. By 2019, dam levels across the country had fallen by between 10 per cent and 60 per cent compared to 2018. It is now the longest drought in 100 years.

Drought poses a severe threat particularly to South Africa’s agricultural sector. “The drought conditions in many parts of South Africa is still having a severe impact on the sustainability of many farms. Farmers in the Northern Cape, Western Cape, Eastern Cape, and Limpopo are still under threat by the continuous drought”, said agricultural organisation Agri SA.

South Africa’s energy challenges and associated power cuts also affect and interrupt the water supply. This is because moving, treating and heating water, and collecting and treating wastewater, all rely on energy.

Water security in a warming world

The combination of more frequent heatwaves and associated droughts “of unprecedented intensity and duration” risks the collapse of the maize crop and cattle industry, according to Professor of Climatology and lead author of the recent Intergovernmental Panel on Climate Change working group report, Professor Francois Engelbrecht. “This is the single-biggest risk for South Africa at the moment in terms of climate change, and in the next decade, this risk will keep on growing.”

It is also important to note that most areas of South Africa have received above-average rainfall since October 2021. However, the pressure on the country’s water resources persists. Studies attribute this to “unsustainably high water use and demand, persistent pollution from various sources, misappropriation of funds, collapsing or non-functional municipal sewage systems and a lack of skilled personnel”. Furthermore, while South Africa might have sufficient supply to meet current demand, government estimates show that demand will outstrip supply by 2025.

This means that South Africa must take action if it is to avoid another major crisis in the near future. This includes improving water and sanitation service delivery and addressing deteriorating infrastructure and water pollution. The challenge is even more urgent due to the risks of increasing drought impacts as a result of climate change, which could have far-reaching effects on the people of South Africa without adequate mitigating measures. Livestock farming contributes to poverty reduction in rural areas. However, industrialised livestock farming is one of the greatest threats to planetary and human health.

Climate changeCropsDroughtEcosystemsFarmingFood securityHealthJobsWater scarcityWildfire
We use cookies on our website to give you the most relevant experience by remembering your preferences and repeat visits. By clicking “Accept All”, you consent to the use of ALL the cookies. However, you may visit "Cookie Settings" to provide a controlled consent.
Cookie Settings Accept All
Manage consent