Why is shale gas still alive in South Africa?

Addressing the climate crisis via a just energy transition is a priority for the South African government. With careful planning, transitioning from a coal to renewable-powered economy would bring a myriad of benefits to the people of South Africa. This includes cheaper energy, cleaner air, more and better jobs, and prosperity for marginalised communities. It also offers the solution to end the woes of load-shedding.

But, despite South Africa’s abundant renewable resources, the government is also planning to increase gas in the country’s energy mix. This involves developing a new gas industry in the country, including extracting shale gas from the ecologically sensitive and semi-arid Karoo Basin. There are a number of issues with this plan.

Economically, it makes little sense. Investing in gas is more costly than transitioning directly to renewables. Shale gas is particularly expensive, as it is difficult to access.

A Karoo shale gas industry would also bring very few employment opportunities – perhaps as few as 2,575 direct jobs. In comparison, the green economy will offer 1.8 million job opportunities in South Africa by 2030. Shale gas extraction is also ecologically damaging and would exacerbate South Africa’s already stressed water reserves. Furthermore, it is incompatible with a 1.5°C world. So, why is the government keeping shale gas alive in South Africa?

Shale gas in the Karoo Basin

The Karoo is a vast, sparsely populated and drought-stricken region in South Africa. Its name is derived from the Khoisan word, meaning “land of thirst“. Despite the semi-arid conditions, it has unique biodiversity, including 9,000 plant species and abundant wildlife. Its economy is based on tourism and agriculture.

There are potentially trillions of cubic feet of shale gas under the Karoo Basin. Shale gas is found in the microscopic pores of shale rock. The gas is difficult to extract, requiring a process called horizontal hydraulic fracturing, or fracking. Over recent years, Shell and other companies have applied for exploration rights for the Karoo, with plans to frack for shale gas. But, these plans could have a significant and detrimental impact on the region, particularly regarding its scarce water supplies.

Fracking requires vast amounts of water; millions of litres per well. Fracking also risks water contamination, and improper wastewater management can be hazardous to the environment and human health. This means fracking could further jeopardise the region’s water security, damaging the ecosystems and livelihood resources that the communities and farmers in the Karoo depend on.

Fracking for shale gas can also increase the risk of earthquakes and lower groundwater tables. It also causes climate-polluting methane leakage. As fracking is so controversial, many counties have banned or placed moratoriums on fracking. South Africa placed a moratorium on fracking for shale gas in the Karoo in 2011, following vocal opposition to the industry. To the dismay of environmental groups, this was removed the following year. 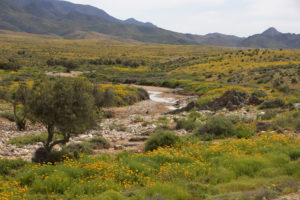 The Karoo landscape and biodiversity

Minister of Mineral Resources and Energy Gwede Mantashe says that his government is committed to a just transition. Indeed, plans are already underway to move South Africa from a high emitting to a clean energy economy. But, Mantashe has expressed doubt about whether renewables alone can deliver the baseload energy required for a stable energy grid. Famously, he is also an influential advocate for the fossil fuel industry, including drilling for shale gas. “Shale gas deposits in the central Karoo are a reality and they are economical. Gas is going to be a game changer in the economy”, he said in May’s budget speech.

In the same speech, he confirmed that his department’s Gas Master Plan is in the final stages of development. As well as the Karoo’s shale gas exploration, the plan includes converting six of Eskom’s older coal plants to run on gas and building thousands of kilometres of new gas pipelines.

The environmental and human rights lawyers, Natural Justice, responded to the government’s plans, identifying a number of significant issues that the plans fail to consider. These include the risk of methane leaks, gas explosions, gas price fluctuations, and the impact of pipeline and infrastructure development on communities, including land expropriation.

More broadly, they say the plans undermine many of South Africa’s global climate commitments, perpetuate fossil fuel dependence and inhibit an energy transition based on justice and equity. “Although the projects might add to the economy, their environmental and social costs often outweigh their benefits. Furthermore, the economic benefits are unlikely to benefit the majority of poor and low income citizens”, they warn. 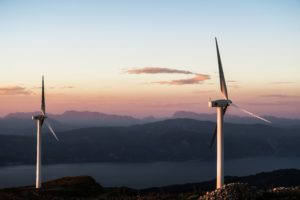 South Africa simply does not need shale gas. While Mantashe’s Gas Master Plan paints a rosy picture of the benefits of a gas-powered South Africa, in reality, the plans fail to address the many social, environmental and economic risks associated with these ventures. Instead, South Africa should focus on an energy transition to renewables to fuel its future.

Renewables-plus-storage is the reliable, low-carbon alternative to gas in South Africa, and is now economically competitive. Renewable energy systems also present the opportunity to decentralise and democratise energy, redistributing power from the industry into communities and supporting a just transition.

South Africa’s abundant renewable resources also mean it is perfectly placed to capitalise on the burgeoning green hydrogen market, set to become a USD $2.5 trillion dollar industry by 2050. Green hydrogen would be transformational for South Africa, according to PWC. It would fuel transportation, provide heat and power to buildings and industry, and also offer a lucrative export market. Green hydrogen can also supply the baseload energy needed to secure the variable supply of renewables, making the need for any gas supply redundant.

Anglo American Platinum plans to begin constructing a 100 MW solar farm in Limpopo later this year. It will be producing energy just 12 months later. Greenpeace Africa stated the following COP26, “The best and most immediate solution to South Africa’s problems – including load shedding and skyrocketing unemployment – is a just transition to renewable energy.”

For these reasons, any shale gas in South Africa should be left in the ground. The government should focus on a rapid and just energy transition directly to renewables instead.

EnvironmentEskomFrackingGasGas Master PlanGwede MantasheJobsKarooPollutionShale gas
We use cookies on our website to give you the most relevant experience by remembering your preferences and repeat visits. By clicking “Accept All”, you consent to the use of ALL the cookies. However, you may visit "Cookie Settings" to provide a controlled consent.
Cookie Settings Accept All
Manage consent