The most detrimental gas companies in South Africa

Gas is an expensive fuel and can be as climate-polluting as coal. Despite this, gas companies are keen to present gas as a ‘bridge fuel‘ and a solution to South Africa’s energy crisis. However, phasing out coal while building a new gas industry does not make sense for the planet, the economy or energy security. Experts predict this fossil fuel will soon be obsolete in a net-zero world powered by affordable and reliable renewable energy.

Despite the evidence stacked up against gas, the South Africa government’s 2019 Integrated Resource Plan (IRP) outlines new gas-to-power capacity to be integrated into the national electricity grid. There are plans for 3,000 megawatts (MW) of gas power to come online just in the next five years. The government’s Gas Master Plan is also pushing for fracking for shale gas in the arid Karoo and exploring new offshore oil and gas fields.

However, plans for a large gas-to-power sector in South Africa rely on a decade-old scenario. This pre-dates the steep cost reductions for clean energy, according to a 2022 report by Meridian Economics. Multiple studies show that very little gas is needed to meet the country’s current and future power needs. These studies also suggest that the majority of new capacity should be wind and solar. Moreover, new gas exploration and extraction pose a severe threat to the climate and environment. Three of the country’s senior scientists have condemned South Africa’s plans for new oil and gas fields as “short-sighted, nationalistic and environmentally irresponsible” and “morally indefensible”.

The problems with natural gas

As a fossil fuel, gas is a leading driver of the climate crisis. Natural gas is mostly methane, a potent greenhouse gas that traps up to 86 times more heat than carbon dioxide (CO2) in our atmosphere over 20 years. This means gas can drive up temperatures quickly. Tapping into new gas reserves is set to blow the world’s carbon budget and overshoot the Paris temperature goals. The International Energy Agency has stressed that there is no room for new gas projects on the net zero pathway.

In addition to driving the climate crisis, fossil fuels come at a huge and immediate cost to society and wellbeing in the form of early deaths, disease and lost working days due to air pollution and environmental damage. The annual social cost of fossil fuel combustion in South Africa is an eye-watering R550 billion a year, the International Institute for Sustainable Development (IISD) calculated. This amount exceeds the government revenues earned from fossil fuels five times over. 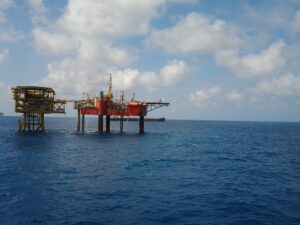 The oil and gas industry cannot compete with renewables

South Africa currently uses very little gas in its energy mix – just three per cent in 2020. Just as the rest of the world is phasing out gas, building an industry from scratch in South Africa is an ill-conceived plan. New gas-to-power infrastructure and plants are expensive to build. Therefore, emissions limits could lead to their premature shutdown and risk stranded assets, IISD analysis concluded. Just introducing the 3,000 MW of gas capacity and supply could cost at least R47 billion. This could ultimately go to waste as cheaper renewables push gas out of the market, says the IISD.

Already, wind and solar in South Africa are 57 per cent cheaper than gas plants for bulk electricity supply. Moreover, battery storage is 30 per cent cheaper for peak power demand. The rapid declines in the cost of wind-solar-storage technologies have invalidated gas companies’ arguments that gas is a necessary bridge fuel in the shift away from coal. Investing in new gas-fired power is therefore likely to be a “costly mistake” for South Africa, says the IISD.

The fossil fuel industry makes vast profits by touting gas as a societal and economic need. It also takes huge public subsidies and lobbies to keep governments on their side. This is what keeps companies in business despite no longer being cost competitive with the renewable sector. Below are some of the companies operating gas projects in South Africa.

Climate organisations are condemning Total’s plans, saying they would detonate a “climate bomb” and are incompatible with South Africa’s climate commitments. Drilling would also threaten endangered marine wildlife and small-scale fishers’ livelihoods, they say. Earlier in September, a court upheld a ban on the energy giant Shell for oil and gas exploration off the Wild Coast of South Africa. The ruling followed widespread public protests against the plans, but Shell is appealing the decision.

Sasol is also the only company that imports gas into South Africa. It transports it from Mozambique via the 865-kilometre Rompco pipeline. However, Sasol sold 30 per cent of its stake in the pipeline to state-owned companies last year. It now plans to source more gas from within South Africa.

PetroSA is the national oil company of South Africa and operator of the Mossgas Gas Field Project off the coast of Mossel Bay. The project began delivering gas via a pipeline to the PetroSA gas-to-liquids (GTL) refinery in 2000. However, the gas fields are now depleted. As a result, PetroSA is looking for new gas sources for its GTL plant. This is the world’s third-largest facility processing gas into fuel. 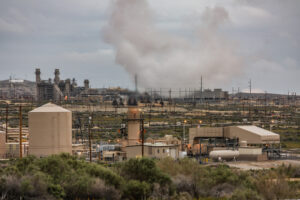 While Eskom’s biggest business is coal, the energy giant has plans to switch towards gas-to-power plans in the future. Its plans include building a new 3,000 MW gas-fired power plant in Richards Bay. This project has met much opposition including a challenge in Pretoria’s High Court.

The new government-owned 1,000 MW Coega gas-fired power plant will also sell its gas power to Eskom for at least 20 years. The plant is due to come online in 2024.

A brighter future without gas companies

The upsurge in gas projects is problematic for South Africa’s climate commitments and is prompting widespread backlash and critique. “Forcing in gas will displace renewable energy development, raise the cost of electricity, expose us to volatile gas prices and increased pollution, global warming and climate vulnerability”, says climate and energy justice campaigner Avena Jacklin. “The burning of fossil fuels has no place in our energy future.”

Instead, a just transition directly from coal to renewables would mean South Africa avoids making this “costly mistake“. Pursuing an ambitious green recovery prioritising zero-emission energy could deliver more than R150 billion to the economy and over 250,000 jobs over 25 years, according to the Global Wind Energy Council (GWEC). To reap the full benefits of a green economy, South Africa should leave gas in the ground and seize the opportunities the country’s renewables have to offer. Mining groups gear up for an emissions-free world

South African mining houses are gravitating towards ‘green’ metals. This is in addition to investing in renewable energy projects to power their operations.

Climate changeEskomFrackingGasGas Master PlanNatural gasPetroSASasolShale gasTotal
We use cookies on our website to give you the most relevant experience by remembering your preferences and repeat visits. By clicking “Accept All”, you consent to the use of ALL the cookies. However, you may visit "Cookie Settings" to provide a controlled consent.
Cookie Settings Accept All
Manage consent