By Sarah Evans 1 April 2022
Watch this video to find out if South Africa can become carbon neutral with gas in its energy mix.

South Africa’s Low Emission Development Strategy 2050 is the country’s most recent emissions reductions plan. However, it does not specifically mention South Africa becoming carbon neutral. Rather, it speaks of “moving towards a goal of net zero carbon emissions by 2050”. However, it does acknowledge that South Africa’s efforts must align with the global goal of ensuring that “the global economy achieves carbon neutrality within the second half of the century”.

At first glance, South Africa’s seeming lack of a plan to achieve carbon neutrality might seem like a problem for the country. But, reaching net zero is actually a far more ambitious goal than achieving carbon neutrality.

The meaning of ‘carbon neutral’

There is a second, more commonly used, definition. This defines carbon neutrality as when a country or entity balances its carbon emissions through carbon offsets.

Carbon offsets are credits that entities can buy to offset, or cancel out, their emissions. This does not necessarily reduce the amount of emissions released into the atmosphere. It merely ensures that when an entity or country produces a certain amount of carbon emissions, another entity absorbs this carbon dioxide. For example, an energy supplier might pay to generate a unit of clean energy elsewhere for every unit of coal or gas energy it sells. Alternatively, an entity might purchase carbon credits to offset the amount of carbon emitted by supporting a reforestation programme.

In South Africa, credits are purchased and regulated through the Department of Energy. To date, the Department’s Carbon Offset Administration System has registered 26 projects.

The difference between ‘carbon neutral’ and ‘net zero’

The terms ‘carbon neutral’ and ‘net zero’ are often used interchangeably. But, they are not the same thing. Carbon neutral refers to market-based mechanisms used to encourage companies and countries to reduce their greenhouse gas emissions. With this concept, greenhouse gases become a commodity, and emissions companies or countries can earn credits for emission reductions. These emissions are normally measured in tonnes of carbon dioxide.

Simply put, carbon neutrality allows companies and countries to continue emitting carbon dioxide while benefitting from offsets if they choose to do so. Reaching net zero demands that they actively reduce these emissions to reach a specific target. The United Nations Framework Convention on Climate Change (UNFCC) is an international, multilateral environmental agreement signed in 1992. This agreement gave birth to the Paris Agreement.

If the world is to avoid the worst consequences of climate change, humanity must limit global warming to 1.5°C by 2050. This is the target set in the Paris Agreement. A total of 195 countries, including South Africa, signed the agreement in 2015. It was ratified in 2016.

The UNFCC’s Race to Zero is an international drive to get countries and entities to commit to reaching net zero by 2050. Facebook and Ford are among the corporate entities to have joined the pledge.

Over 150 of the 191 Paris Agreement signatory countries have submitted new or updated NDCs, according to the United Nations.

South Africa released its Low Emission Development Strategy 2050 in February 2020. It states that South Africa “commit(s) to ultimately moving towards a goal of net zero carbon emissions by 2050, which will require various interventions to reduce greenhouse gas emissions.”

But, there are scant details about what this will entail. The South African government’s National Planning Commission is working on a plan to get the country to net zero by 2050. However, this has not been released yet.

Many countries’ net zero promises appear thin on detail. In the case of Australia, the country released its net zero “plan” on October 26, 2021. But, some commentators have criticised it for having no new policies. They say that the plan allows polluters to decide for themselves whether and how they will reduce emissions.

While China is constructing a mega renewable energy project as part of its efforts to reach net zero by 2060, its top officials maintain that fossil fuels will be an essential part of its energy mix well into the future.

Why we must reduce greenhouse gas emissions

The WGI contribution to the IPCC’s Sixth Assessment Report brought home the urgency of the goals set out in the Paris Agreement. “The scale of recent changes across the climate system as a whole and the present state of many aspects of the climate system are unprecedented over many centuries to many thousands of years”, according to the report.

“It is unequivocal” that humans are responsible for the Earth’s warming. This has resulted in more extreme weather events, such as heatwaves, tropical cyclones and droughts. Some of the changes to the climate system are unprecedented in hundreds, or even thousands of years, the IPCC found.

Crucially, the Earth’s surface temperature will increase until at least the middle of this century. This is under all modelling scenarios undertaken by the IPCC. The world is unlikely to reach the Paris Agreement’s goal of keeping warming below 1.5°C at the present rate of warming. That is “unless deep reductions in carbon dioxide and other greenhouse gas emissions occur in the coming decades.”

At the moment, there is as much carbon dioxide in the atmosphere as there was 3.6 million years ago. At the time, sea level was nearly 24 metres higher than it is now. The Earth was much warmer, and large forests likely existed where the Arctic tundra is today. 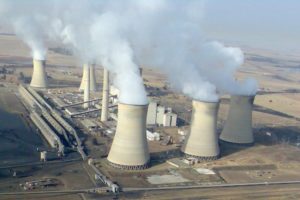 Why gas cannot be part of a carbon-neutral South Africa

South Africa must reduce its emissions to net zero by 2050 to align its goals with the Paris Agreement. This means no new oil and gas fields or coal mines should be approved by the government, as recommended by the International Energy Agency (IEA). But, South Africa intends to use gas as a transition fuel as it moves towards renewable sources of energy. It also has plans to invest in new coal power stations.

The country plans to decommission its existing coal-powered fleet at an estimated rate of 1000 megawatts per year over the coming decade. Minerals and Energy Minister Gwede Mantashe has said that gas is an important transition fuel for South Africa. In other words, it would help the country to decarbonise and move towards a majority-renewables electricity grid. He called natural gas “a potential gamechanger”.

South Africa’s most recent energy plan (2019) states, “Gas to power technologies… provide the flexibility required to complement renewable energy.” In South Africa, gas accounts for just under three per cent of the country’s total energy mix. According to the country’s most recent greenhouse gas inventory report, gas emissions are increasing – primarily due to the waste sector. The country plans to increase the amount of gas-to-power in its energy mix to 12 per cent by 2030.

The inventory report states that carbon dioxide remains the dominant greenhouse gas in the country. Most methane emissions thus far come from waste and agriculture.

But, the picture will likely change if gas becomes a large part of South Africa’s energy mix, as natural gas comprises 70 per cent to 90 per cent methane. Therefore, South Africa is unlikely to become carbon neutral or reach net zero by 2050 with gas in its energy mix.

Carbon dioxideCarbon offsetsDMREFossil fuelsGwede MantasheNDCsNet zeroParis AgreementRenewable energy
We use cookies on our website to give you the most relevant experience by remembering your preferences and repeat visits. By clicking “Accept All”, you consent to the use of ALL the cookies. However, you may visit "Cookie Settings" to provide a controlled consent.
Cookie Settings Accept All
Manage consent